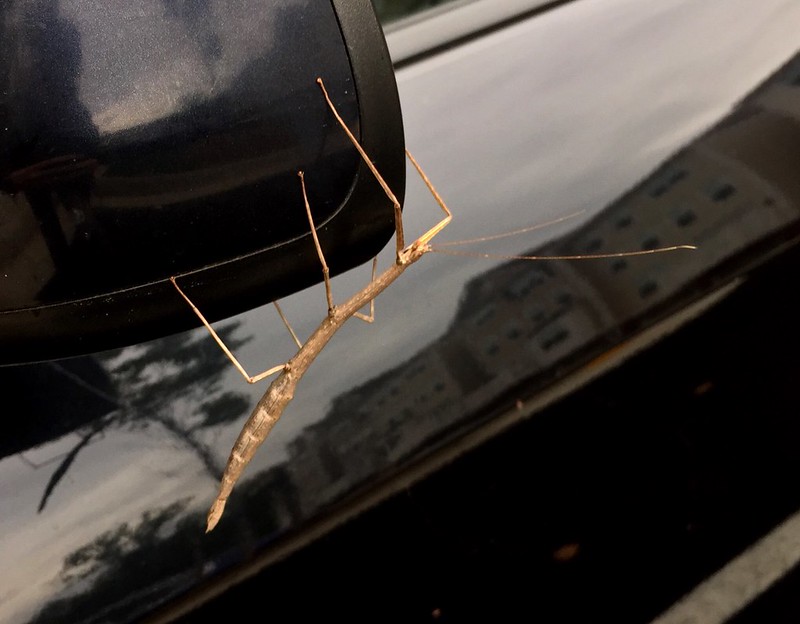 A “walking stick” is normally so well camouflaged it’s almost impossible to see. But their natural mimicry works better in a tree or shrub than it does on a solid black car!

The implication from the article is that Obama’s leadership and policies have resulted in an unnecessarily high casualty rate in Afghanistan. But what Allen ignores in this little presentation is that these numbers are not matched to “the surge” strategy put in place in late 2009 through 2011. So the numbers of casualties increased, but so did the number of troops deployed in theater. This is why a raw number is less useful than a percentage rate. Just another example how data can be made to fit a story instead of being used to impart knowledge.

So, I got lost in a little thought experiment recently. If you believe we have souls, a natural question is when do we get a soul? I think most people would answer at conception, although I admit it’s possible some would say at birth or some other time. But then I’m left pondering the turn over rate for souls, because somewhere around 30% of pregnancies end in spontaneous abortion. Sorry for being morbid about it. But it just seems weird to me. I mean, it almost seems like a corollary to the problem of evil – the problem of wasted souls.

Certainly I think a soul would have inestimable value. And conception seems to be the most defensible point for something special like that in the process of creating a new human. But then you end up with the question of why God is pumping a third of these valuable souls into little zygote bodies that are then killed without ever having anything we could meaningfully call a “human experience”. I guess you could rationalize that these souls would go to Heaven as a way to console yourself, but that seems to open up the uncomfortable question of when it’s better to send someone on their way to Heaven than to let them live their life. I mean, if spontaneously aborted babies go to Heaven, wouldn’t that imply that artificially aborted babies go to Heaven too? If you’re upset by the latter, how can you not be equally upset by the former?

The other obvious alternative is to declare a soul as coming sometime after conception. But when? Birth seems like the next likely candidate, but then the artificial abortion sword cuts the other way – without a soul, it seems like an argument could be mounted that a pregnancy is just a “lump of flesh” until it’s birthed (or viable, or whatever). Not a situation that some people seem comfortable with.

So, I guess neither scenario seems to make much sense to me in the abstract. I’d be interested to hear what my more spiritual readers think.

With all the recent gun control discussions lately, I’ve seen a resurgence in use of “common sense” to justify various legal proposals. Let me outline a few reasons why I think “common sense” sucks.

When you say something is “common sense”, you’re avoiding describing it in a cogent fashion. When you can’t elucidate your ideas in a clear form, it makes it harder for others to understand them, and harder for others to debate them. It turns a debate into a wrestling match w/ a blob of jelly, because you have not taken a definite position for your opposite to evaluate.

When you say something is “common sense”, you’re implying that anyone of equal intellect and knowledge would reach the same conclusions you have. In the real world, this is rarely true. More importantly, when you present that attitude during a conversation, it is insulting and demeaning to whomever disagrees with you.

It unfairly shifts the burden of proof

When you say something is “common sense”, you implicitly force your opposite to justify his disagreement without you first justifying your position. This is the opposite of good manners in a debate. If you are proposing an idea, it is your responsibility to present the evidence and logic to support that idea.

So, if you want to espouse your beliefs on what we should do to make this a better country, please do so. Just don’t justify it as “common sense”. 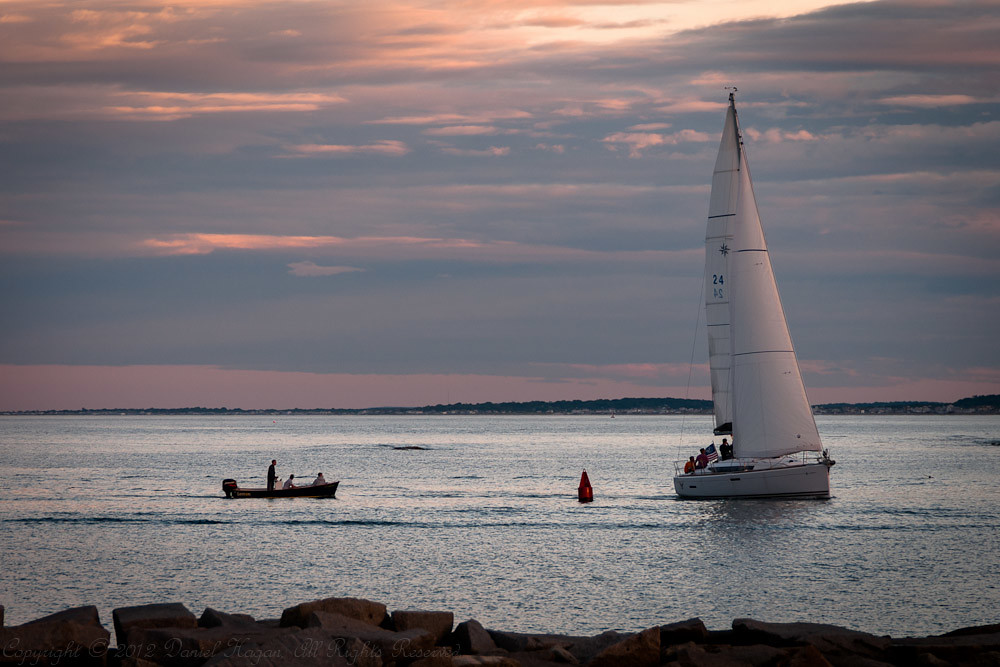 In case you haven’t already heard about this, here’s the upshot:

In 2011, The Oatmeal posted a blog post complaining about his material being blatantly ripped off by FunnyJunk users. The most painful part is that while he can request the material be removed, due to the state of copyright law, it’s a huge pain in the ass and just not practical. So he posted his blog post, vented to the Internet and then FunnyJunk responded by stirring up it’s users and also taking down the specific links mentioned in The Oatmeal’s blog post.

Fast forward to a few days ago, when Charles Carreon sent a letter to The Oatmeal threatening a lawsuit for defamation of FunnyJunk. The Oatmeal did exactly what anyone who knows him expects – he posted it to his site and tore the whole thing apart for the blatant bullying hypocrisy it was. He also had a lawyer with excellent lawyering skills send a real legal response back to Carreon that differed in tone but not conclusion. But to put icing on the cake, The Oatmeal started a fundraiser for charity and instead of paying the $20,000 demanded by Carreon & FunnyJunk, he plans on giving all the money to the National Wildlife Federation and the American Cancer Society.

Carreon, having stirred the dark legions of the internet into a wrathful fury by picking on The Oatmeal, did what any rational person would do – he apologized and let the matter drop.

Haha, just kidding! Carreon apparently took this exposure of his bullying and hypocrisy as a personal affront, and not only sued The Oatmeal but doubled down by suing The National Wildlife Federation and the American Cancer Society as well.

I really don’t know what’s wrong with this ass-hat that he thinks this is appropriate behavior, but it’s hopefully only a matter of time until he gets his ass handed to him in court. In the mean time, you can read a humorous legal analysis of the situation over on Popehat.com (whenever his site comes back up) and LoweringTheBar.com (post1, post2, post3) (and donate to the charity fundraiser on Indiegogo here).

Well, I’m not sure what you did with your Friday night, but I’ve spent the last few hours migrating websites from my Amazon Web Services instance to a virtual server at Linode. I’ve experimented with AWS for just over a year now, but the simple fact is that running multiple sites in a micro instance was just not a good idea. My micro instance would hit CPU throttling after less than a minute of CPU use, and then would be cut back to 2% CPU usage. I knew this limitation going in to AWS, but it finally became too big a hassle.

Cindy and I run a total of seven sites. None of them are particularly high traffic, and I’m sure we would be fine in a small instance at AWS. Unfortunately, a small instance is a lot more money. A Linode node is about the same price, but the customer service at Linode is what really pushed me over the edge.

I run a Tor relay on Linode that I’ve secured fairly heavily. The few times I’ve noticed another Linode customer scanning my system or had some other technical issue, the Linode support staff have been extremely responsive. But best of all, not only are they timely, you actually talk to someone who knows what the fuck is going on. As much as I admire automation, I have to admit it’s very comforting to know that if I email Linode tonight, I’ll have an actual technical person replying to me by the morning (and they’re likely to have already fixed the issue).

Now, in the grand scheme of things, Linode is not really competing against AWS. AWS is all about automated provisioning and large scale rapid development. Linode doesn’t have anywhere near the provisioning and deployment features AWS has. But that’s ok. I’m not trying to rapidly scale up to handle millions of customers, I’m just trying to run a few blogs.

Another migration that I’m part way through is moving our systems into CloudFlare for security and acceleration. Unfortunately, getting self-signed SSL certificates and WordPress to play well with the free version of CloudFlare is proving to be tricky. Once I get the wrinkles ironed out, that’ll be another blog post.

If you’re looking for a server host, and want to support Cindy’s & my websites, use our Linode referal link!

I’ve been playing around with splunk lately, and one thing I’ve noticed is that I am getting a lot of pings from a certain range of IPs. I block inbound ping at my firewall, but this was so persistent I got a little curious. Here’s the log exerpt that piqued my interest:

That’s the trimmed output, but you can see a bigger set of logs if you’re interested.

So just who are these persistent pingers?

As you can see, both ranges are owned by Facebook. So the question of the day… Why is Facebook ping scanning me?!? Get your guesses in now, because I’m going to email their abuse address and see what they say. 😉

Just a quick note about a new service I think lots of my friends might find useful – If This Then That. It’s a service that let’s you drag-n-drop connections between events online. I’m testing it out right now with the following rules I added:

Those two rules look like this in their simple, graphical, rule builder:

And in the detailed task editor:

I’m hoping this really simplifies the growing web of online services I use to communicate online! You can see the list of services they support on their website under the list of Channels. If you try it out, let me know how it works for you and what creative uses you find for it!

For those who don’t know, the European Union has much stronger safety and privacy laws than the US. The EU just announced their new official policy for the deployment of airport scanners. Two key quotes:

It is still for each Member State or airport to decide whether or not to deploy security scanners, but these new rules ensure that where this new technology is used it will be covered by EU wide standards on detection capability as well as strict safeguards to protect health and fundamental rights.

In order not to risk jeopardising citizens’ health and safety, only security scanners which do not use X-ray technology are added to the list of authorised methods for passenger screening at EU airports.

If only TSA would accept that dosing people with X-rays and taking nude pictures of them isn’t actually necessary for security! Hopefully the new EU regulations will spur Congress to pass similar laws that protect the health and privacy of Americans. As Scientific American reports, the TSA is planning on deploying over 1800 scanners in airports across the country. Write your Representative and Senators now to encourage them to follow the EU’s lead in protecting citizens!